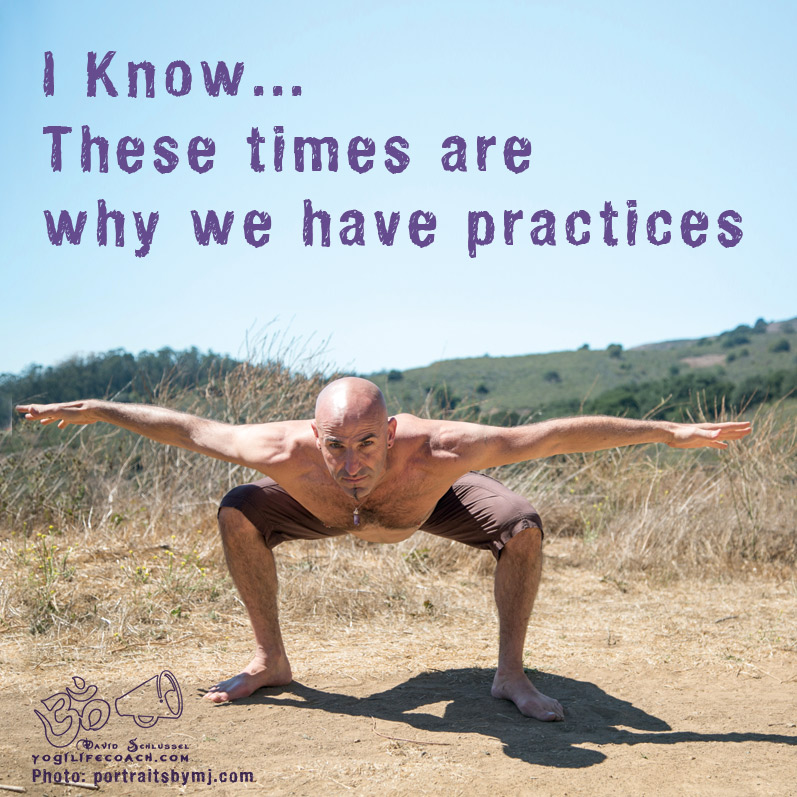 Out here in the Berkeley area, I, and most of the people I’ve talked to, have anxiety about Drumpf’s election. People tend to be braced for the worst, depressed, and grieving.

So what does yoga have offer us in this situation? Plenty.

First of all, yoga is about the present. Yoga is about clearing our mind so we can actually be available to experience reality uncluttered by our conditioning.

While I have all kinds of ideas and preferences about what is about to happen, I am probably wrong. It will be better in some ways, and worse in others. All I know is that right now, Drumpf is President-elect, and that he is picking his cabinet. I may have feelings and predictions about those, but I don’t know how it will actually go.

The yoga is to feel my relationship to actual reality. To process the sensations without being reactive, and to come back to a clear place where I can make clear decisions and take clear actions.

If yoga is a state of awareness, in the dichotomy of open/loving vs. closed/fear, yoga is the open state. When we are in a contracted fear state, we tend to make hurried decisions to avoid worst case scenarios.  Even if he is actively working on designing the exact worst-case scenarios we are most afraid of, I’m guessing those taking the time to read this are not in any immediate, next-five-second danger to health and safety.  So we can afford to take a moment to get present.  When we are in an open, yoga state, we tend to make decisions based on how to move towards the best case scenarios.

The yoga practice, then, is to take this time now, in the safety of this window before those worst-case scenarios have a chance to play out, to pause and feel the quality of fear that we are experiencing, and allow ourselves to come out of the fear state into the safety of this moment.

Secondly, most of the folks I talk to are telling me about being in a state of bracing themselves for the future. This bracing has a physical attribute to it, a clenching in the body. Now, you can bet clenching my body would not help me address any of the issues I’m worried about.

The yoga practice here is to go to my mat, think about my fears, and feel where I tense up in my body. With that information I can then move into poses that help me relieve that unnecessary layer of wasted energy, relieve the stress, and drop me into that state of yoga.

Thirdly, and most vulnerably, what this election has been bringing up for me has been ancestral trauma around Hitler and the Holocaust. While Drumpf is clearly not Hitler, and has opened no death camps, I feel that fear in me that has been latent my whole life, that some day an anti-Semite would rise to power and it would start all over again.

When traumatic responses arise outside of any actual trauma, the yoga is to purify them: to go into the fear, feel that fear and the bodily responses, and let them play out in a safe container.

Today I confessed this fear to a German friend. As I spoke this fear, I could feel the unspoken tension I’d had with her, not trusting her because of her German heritage. I had known her for more than a decade, and had never confessed that I’d always held her at a distance for that reason. Things shifted for me in that moment. I saw that she probably has trauma there, too. Perhaps she carries guilt about things that happened in her country before she was born. My lack of trust was based on events unrelated to her. As she walked away, I realized that like this election, Hitler got less than 50% of the vote, and that much of Germany was implicated in his atrocities without actually wanting them. I thought about all the Germans detesting Hitler and thinking “Not in my name” while he tore up Europe, and found new compassion in my heart for all the Germans I’d held at an arms length my entire life. I saw her again later, told her about this, and gave her a big hug.

That’s the yoga right there.

So this time is for getting clear so that we can take clear action.

Theres this great story in the TV show “Lost” where a surgeon tells a tale of being at the tail end of an eight hour intensely focused surgery, nearly completely exhausted, sewing up the patient, when a scalpel slipped and cut the patient right back open. He knew he’d have to go back in, even though he was exhausted, for many more hours. He decided to give himself five seconds to fully feel the rush of fear, anger, self-judgment, exhaustion. One, one thousand. Two, one thousand. Three, one thousand. Four, one thousand. Five, one thousand. And back to work.

So I’d say now is the time to fully feel the tension, grief, anger… anything that’s clouding your vision. Give it enough time to be felt. Then, let’s get to work on taking care of the things that we’re afraid won’t be taken care of by someone else. Let’s work more directly for what’s important to us.

These times are why we have practices.